Chris Layne and his team were able to take a situation where the only option the Homeowner had was to rebuild and gave her a second option. She did not want to ruin her structure or pay those absorbent costs! Chris Bailey worked hard with multiple team members to come up with a plan that was outside the box.

Chris came up with a plan that included horizontal straps across the top of the wall that did not have a viable top attachment. Most companies would have just installed the supports without a proper top attachment because they would not have spent the time to come up with an alternative plan to PROPERLY protect the customer’s home. Chris Layne opened that wall to find that we had a situation even worse than previously thought. A bad company/foreman would either walk away or maybe continue on without a thought for the integrity of the structure. Chris knew what he was looking at and made the only responsible choice which was to WAIT! He knew that to properly fix a wall this bad, it required a special support structure that had to be installed first. This was not part of the original plan as we did not know how bad the wall was behind the finished wall.  Chuck Morrison dropped everything once he heard about the issue and drove the KBS braces out to Chris to properly brace the wall. Chris and his crew were able to brace the wall finally by the end of the first day. They got started on the repairs on day two which meant the job would run long and so he worked through the weekend to make sure he did not fall behind with other customers and ruin their plans! The end result is a proper solution that protects that customer’s most prized nonhuman possession. Do they know all the work that went into that to make it happen? Do the customers the following week know why their jobs were able to go in per normal? Of course not, but that’s okay because we all know what was needed and we got it done! ONE TEAM!!! 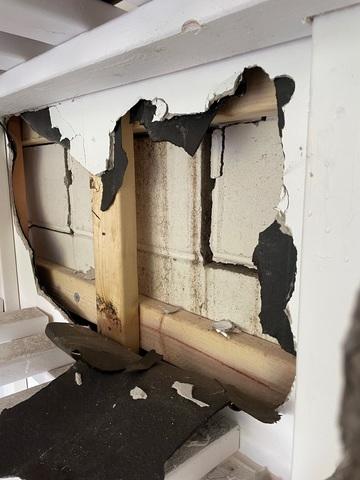 Photo shows what was behind the finished wall when work started 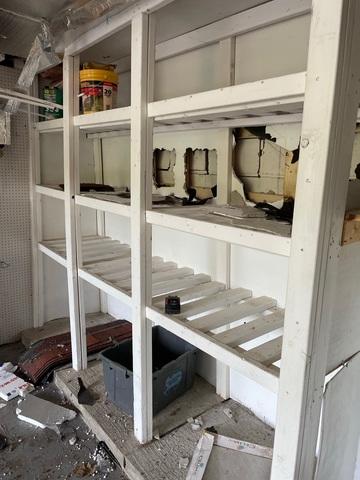 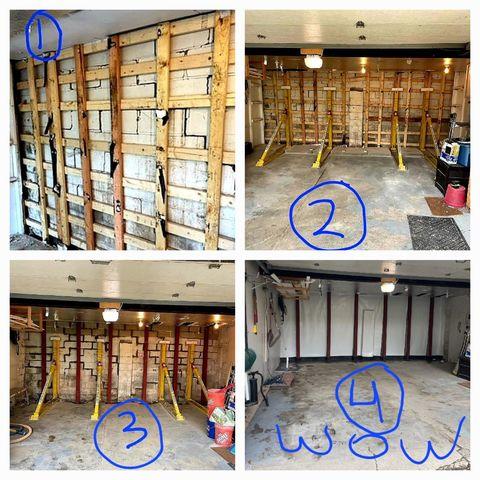 progress photo from removal of finished wall/shelves to completion