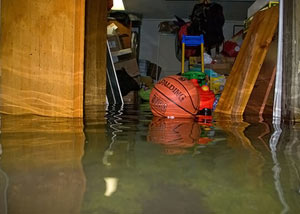 Don't let this happen to your home. Sump pump failure can lead to a very serious flood in your basement if you have no backup system in place.

Like any mechanical utility within your home, your sump pump can eventually fail. A sump pump contains moving parts that can wear out or malfunction over the years.

The best way to ensure that your home is protected from a sump pump failure is to install both a powerpack sump pump and a secondary sump pump to operate in an emergency.

Get a free estimate for a backup sump!

Get a FREE Quote!

Sump pumps lose power for a variety of reasons. Aside from the obvious power failure, it's possible for a circuit to trip, especially for sump pumps plugged into GFI outlets. At Keystone Basement Systems, we've also seen many cases where the sump pump was unplugged by someone who needed to use the outlet but forgot to plug the sump pump back into the outlet. More often than not, this has led to water damage to nearly everything stored in the basement.

Components in the UltraSump® system are designed to work together, providing reliable, high-volume pumping capability when the electrical grid goes down.

Have you ever thought about what would happen to your sump pump system if you lost power? A serious storm could wreak havoc on your home, especially if you don’t have a reliable sump pump system to prevent basement flooding. We recommend installing Basement Systems UltraSump 4 powerpack with your main AC powered sump pump, which will ensure lasting security. The UltraSump 4 system can pump out up to 12,000 gallons of water on a fully charged battery, which is enough water to fill a swimming pool!

To alert you of a power failure, the UltraSump 4 sounds an alarm when it turns on. Once you are alerted, you can mute the system for up to 18 hours. If power isn’t restored after that time, the powerpack will alert you again.

If you have a primary sump pump and a powerpack sump pump, your basement is already well on its way to being protected. However, if your primary sump pump fails due to mechanical failure, your basement waterproofing is only good as long as your battery backup can last. And if your sump pump is being overwhelmed due to an unusually high volume of water, it's best to have a secondary sump pump that can kick in and help keep the water down.

Get a FREE Quote!
Related Pages:

Sometimes, a homeowner will tie their sump pump system into their generator to keep it powered during outages.

However, this only works if you are home (and awake) to turn the system on. Automatic systems typically cost $7,000-$10,000 to install. Because there is only one pump, you will have no secondary system to address heavy rains or primary pump failure.

Some sump systems include a battery that converts DC battery power into AC power to charge your primary pump.

Transforming DC power to AC is a highly inefficient process, and these battery backup systems often lose their charge within an hour's time. Because there is only one pump, you also will not be protected from pump failure or overwhelming water volume.

Water-powered sump pumps use your water supply to run your sump pump system. Thus, they can operate without power.

Unfortunately, water-powered pumps pump very slowly and require you to have very high water pressure. They are also wasteful systems, discharging 3-5 gallons of good water for every gallons of groundwater pumped out of your home.

Battery Backup Sump Pumps use a battery and a separate battery-powered sump pump to operate.

When a high-quality battery backup is installed, you can pump out thousands of gallons of water on a single charge. And because you have a second pump installed, you're covered during sump pump failures and during overwhelming rains as well as during power outages.

Looking for a price? Get a no cost, no obligation free estimate.