Corey and Risa Had called in after seeing us at the Westmoreland County Fair the prior year. They had some water seeping into their house and couldn't figure out where it was coming from. Keystone then sent out their best of the best field inspector Aaron Stull who sat down with the homeowners and discussed the issue at hand. After they spoke about this issue he also performed a in detail inspection of the said area and noticed that the water seeping in was due to their downspouts not only being to low but in dire need of a elbow and also 98 foot of downspout that would lead into their leech field.

Keystone sent out Aaron Stull to do a inspection and come up with a plan of action to insure this house would be dry again. His plan included 98 foot of downspout, raise up the existing downspouts that were connected to his house as well as adding a elbow to help direct the water to flow to the proper places. Upon completion of this project the house would be under no threat of water seeping into the cove again. 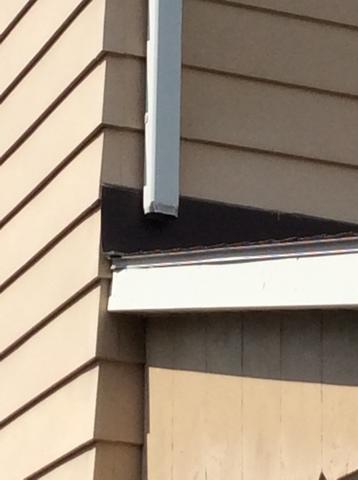 needs an Elbow and somewhere to go